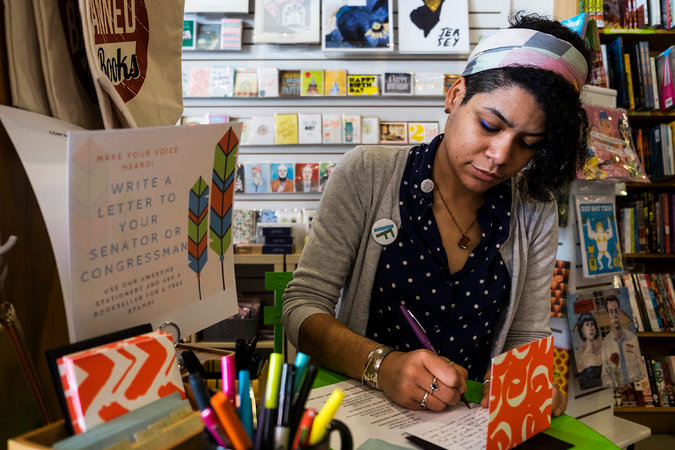 In Which We Drink To Detective Fiction By Dead White Guys, Become Jealous of Literary Paper Dolls & Ecstatic Raccoons, And Dive Into Frontlist Season With ALL the September Releases

Drink of the Day: The Gimlet a la Raymond Chandler (recipe and quote from Hemingway & Bailey's Bartending Guide to Great American Writers by Mark Bailey and Edward Hemingway) Emma’s reading Spinster: Making a Life of One's Own by Kate Bolick Kim’s reading Boss Life: Surviving My Own Small Business by Paul Downs and Out on the Wire: The Storytelling Secrets of the New Masters of Radio by Jessica Abel HOLY SHIT THERE ARE SO MANY SEPTEMBER RELEASES! Here are some: In Which Business Books are Chauvinistic (Shocking!), Hannah Brings Wildlife Into the Store, Galleys Meet their Death, and the Drunk Booksellers Nerd Out About Writing Bookselling Manuals Due to their recent partnership with Busboys and Poets, Hannah also rides the Metro around D.C. merchandising their displays. Interested in the business of retail? Kim won’t stop monologuing about Why We Buy: The Science of Shopping: Updated and Revised for the Internet, the Global Consumer, and Beyond by Paco Underhill

If you want to shell out a lot of money to travel abroad, you should do it with a book bent, obviously: Politics & Prose Trips

Remember what you liked about your major before you had to actually do all that fucking work? Join the rogue students taking Classes at Politics & Prose. It’s like in Center Stage where she goes to the wrong side of the tracks and moves her hips, but for books.

Want to get into Mysteries?

Step One: Read The Adventures of Sherlock Holmes by Arthur Conan Doyle

Also check out Whose Body? (Book 1 of the Lord Peter Wimsey series) by Dorothy L Sayers (also check out her essay Are Women Human?, a great companion to Virginia Woolf’s A Room of One’s Own)

For more recs, check out Hannah’s Book Riot post: Black Coolness (Or Not)

In Which Hannah Picks Her Station Eleven & Wild Books, Then Tells Us All the Places You Can Find Her On the World Wide Web

Find Hannah on the Internet:

Don’t forget to subscribe to Drunk Booksellers from your podcatcher of choice. (Kim’s fave app is Stitcher, but you do you.) Do you love our show? Tell the world! Rate/review us on iTunes so that we can become rich and famous from this podcast. Or, you know, so that other nerdy book-folk can find us. We’re cool with either.