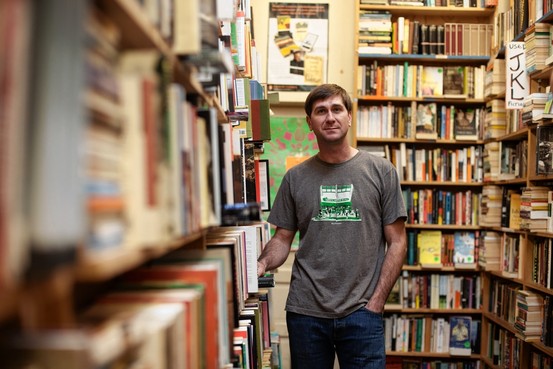 You can also stream the episode on iTunes and Stitcher. Follow us on Twitter at @drunkbookseller for updates, book recs, and general bookish shenanigans.

Check out our show notes, after the jump!

Our theme music, Bitches in Bookshops, comes to us with permission from Annabelle Quezada. It’s amaze-balls, and Kim just discovered Annabelle’s other literary Kanye parody, Hardcover Bound 2 AND IT’S ALSO AMAZE-BALLS (and, uh, you should stick around at the end of the episode for a nice lil hidden track). Check it:

In Which, If You’re Interested in Reading Anything Where a Story Ends with a Boy Jumping on Top His Parents Bed Right After They’ve Finished Having Sex, Dumping Out the Ashes of Their Dead Cat onto Them, Then You’ll Probably like Ramona Ausubel. Pete’s reading: The Fear Project: What Our Most Primal Emotion Taught Me about Survival, Success, Surfing... and Love by Jaimal Yogis & Homegoing by Yaa Gyasi (pubs 7 June 2016) Everyone’s REALLY EXCITED about Black Panther #1 by Ta-Nehisi Coates (of Between the World and Me fame). Available at your local indie bookstore soonish? Maybe? Or go to your local indie comic shop, ‘cause those places are great too.

In Which Bookstores Can’t Count to 25, Pete is a Closeted Straight Man, and We Learn About Bitcoin But seriously, y’all. Those masks, amirite? And, in case anyone other than Kim is interested in WTF Bitcoin is, here’s Wikipedia. Unfortunately, a bit of Pete’s audio was cut out, during which time he regaled us with the story of Dread Pirate Roberts (no, not that one). Interested now? WIRED has a pretty great read for you.

In Which We Discuss California Bookstore Day, the Rise of INDEPENDENT BOOKSTORE DAY, and Get to Hang Out with Samantha Lauren Groff is the author ambassador. You might have heard of her. She wrote Obama’s favorite book of 2015: Fates & Furies. In Which Pete is Not THAT Old, But He’s Totally On the Sleep Game

Go-to Handsell: The Tenth of December by George Saunders, Nudge: Improving Decisions about Health, Wealth, and Happiness by Richard H. Thaler, The Plover by Brian Doyle

Also mentioned: The Sleep Revolution: Transforming Your Life, One Night at a Time by Arianna Huffington

Readerly Confession: Pete doesn’t read nearly as much as he wished he did. Neither do we. #BooksellerLife

Pete wants everyone to visit Omnivore Bookstore in SF. It looks fucking awesome. In other news, if you’re not following us on Twitter by now, it’s probably because you don’t have Twitter. But here’s where you can find us, in case you decide to join the Twitter-sphere: @drunkbookseller.

Emma tweets @thebibliot and writes nerdy bookish things for Book Riot. Like, seriously nerdy, as evidenced by a recent post titled What the Cats of Neko Atsume are Reading.

Make sure you don’t miss an episode by subscribing to Drunk Booksellers from your podcatcher of choice. Also, if you read this far in the show notes, you are awesome and we love you and you should totes rate/review us on iTunes. Emma and Kim both have birthdays at the end of April, so a nice review would be the best of birthday presents. Other than copies of The Lesbian Sex Haiku Book (with Cats!) by Anna Pulley, which we’d both happily accept as well. Please send to WORD and/or The Elliott Bay Book Company, ATTN Drunk Booksellers. Thanks, and happy birthday to us.